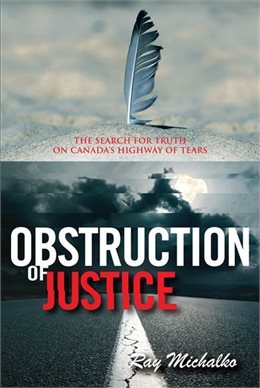 Obstruction of Justice by Ray Michalko

Synopsis: “The Highway of Tears” is a lonely seven hundred kilometer stretch of road that winds through the Coast Mountains wilderness of British Columbia. Over the last four decades nine young women have been murdered or gone missing from this remote highway. All but one were Aboriginal. To date not one case has been solved.

Fueled by frustration with the police”s inability to solve any of these crimes, inspired by the belief that someone somewhere knew something, and driven by his inexplicable personal commitment, ex-RCMP turned private eye Ray Michalko embarked on a life altering journey to unlock the secrets of these cases and, in the process, discovered as much about the crimes as he did the reasons they”ve gone unsolved.

What an amazing dedication to the nine women who lost their lives on the “Highway of Tears”. Ray Michalko was a member of the RCMP, but is now a private investigator in British Columbia, Canada. For over nine years he has worked on his own time to try and solve the nine murders that have taken place within a 40-year period, along a highway in British Columbia.

The 724 km road, which is a stretch of Highway 16 that connects the cities of Prince George and Prince Rupert in northern British Columbia, has become known as the “Highway of Tears”, due to the number of murderers that have taken place over the last four decades.

Michalko’s dedication and research are strongly apparently in this 250+ page book. He shows the struggles that he has encountered during his quest to bring the murderer to justice. However, his mission is to no avail as he has difficulty getting help at every step of the way.

The book will leave you questioning what you know about police forces and what is done to solve murder cases – especially ones that are up to 40 years old. Hopefully, this powerful novel will help to bring awareness to these unsolved murders and motivate both the RCMP, British Columbia police forces, and the general public to dedicate more time and resources to finding the murderer of the nine women who have lost their lives along the “Highway of Tears”.